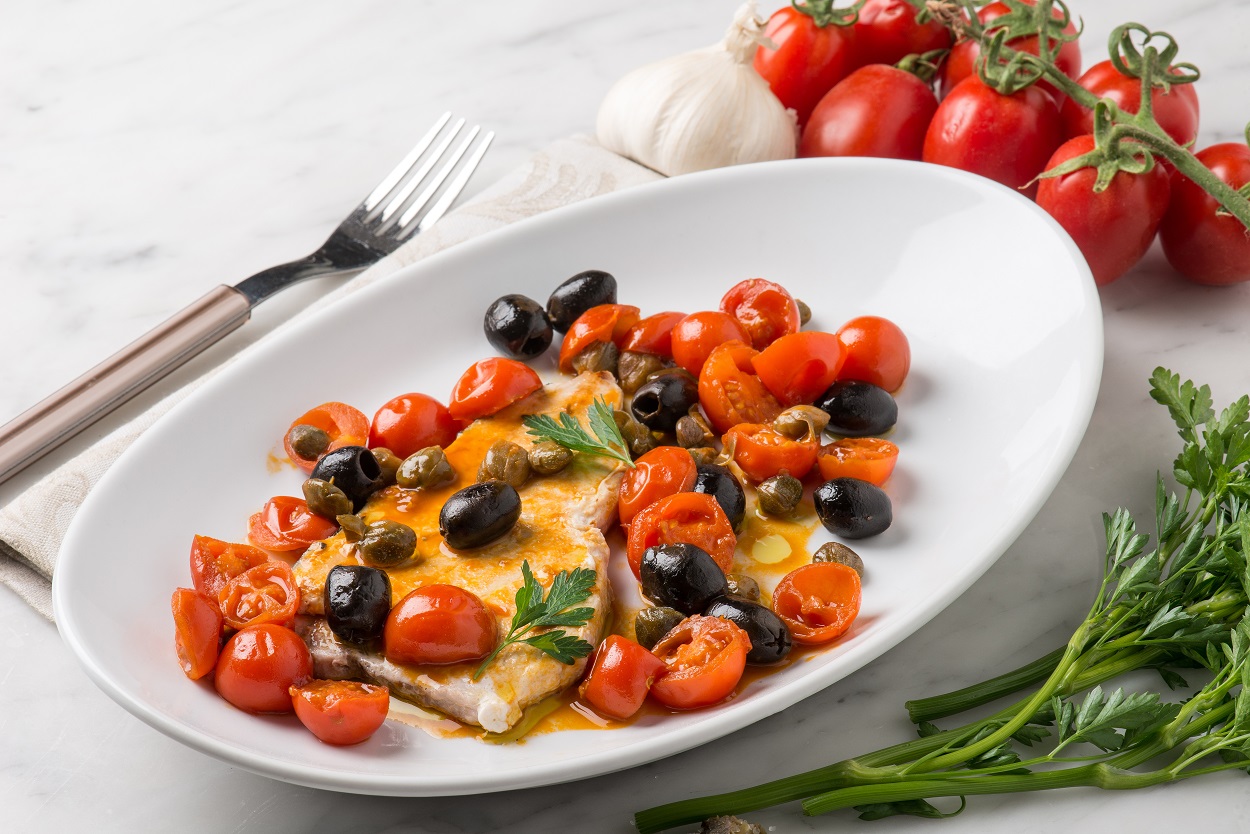 This is a recipe article to prepare the Sicilian Swordfish. If you have bought swordfish here is a tasty recipe that you will love!

The Sicilian swordfish is a very tasty and tasty typical dish of the island cuisine, in particular this recipe is inspired by a second course originating from the city of Messina. Here the preparation is called swordfish alla messinese and represents a triumph of four flavors and basic ingredients of the local cuisine: the very fresh swordfish, olives, pine nuts and cherry tomatoes.

What makes this dish special is the “ghiotta” or “agghiotta”, the succulent sauce in which the fish is immersed. This kind of sauce is also ideal to accompany other types of fish but also white meat such as rabbit or chicken.

Here are the ingredients for the preparation of the recipe for 2 people. The dish contains 381 calories.

You start by preparing the cherry tomatoes, which after washing them must be cut in half. Peel the garlic leaving it whole and fry it in a large pan with extra virgin olive oil. After about two minutes you can add the tomatoes previously cut, oregano and a pinch of salt. Let everything cook for ten minutes and in the meantime cut the pitted olives into very thin slices. These should also be added to the sauce in a pan.

At this point you can remove the clove of garlic and put the swordfish in the pan and cook it for two minutes on one side and then the same time on the other. After that, cover the pan with the lid and cook for another three minutes. Only at the end of cooking is the preparation sprinkled with black pepper.

Sicilian swordfish is a delicious dish if prepared with fresh ingredients. It can be kept for two days in the refrigerator, better placed in a glass container with airtight closure. If all the ingredients are fresh you can freeze the Sicilian swordfish.

Obviously there are many variations of this dish that are prepared in Sicily. Each one respects its own culinary traditions and is enriched by the ingredients you prefer. Some recipes include the addition of sultanas or capers. You can customize the dish at will, using quality raw materials and a good dose of imagination and creativity. To enhance the scents and aroma of Sicilian swordfish, the advice is to pass the dish in the oven at the end of cooking. Enjoy your meal!

English
Add to cart
This site uses technical and third-party cookies to provide some services. By continuing to browse, you will allow their use. More information